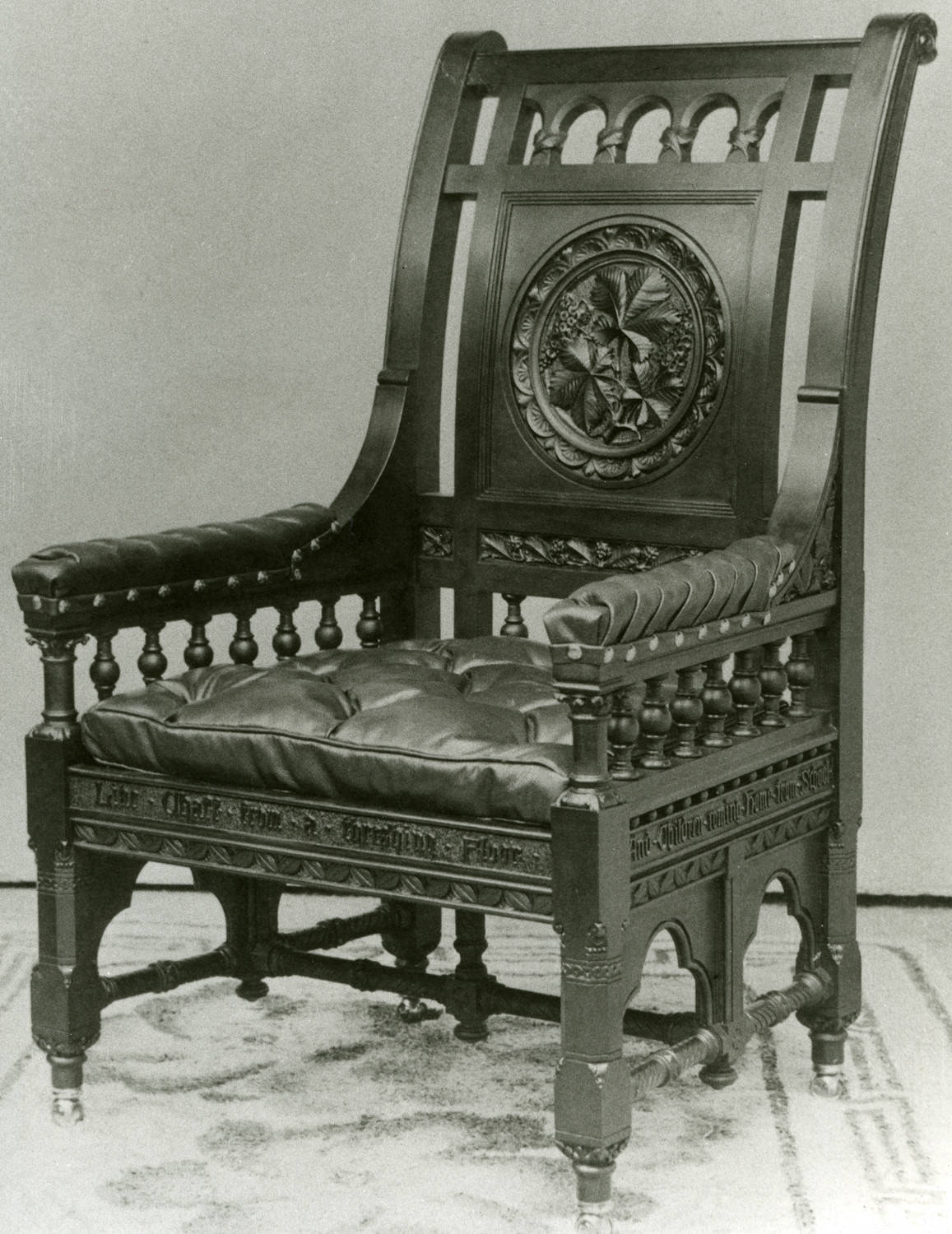 Gothic Revival-style armchair with an upholstered seat and arms.

The rectangular back is arched backward. The outer edges of the stiles and crest rail have a line of bead molding. Below the crest rail and flanked by rectangular cutouts, is an arcade of rounded arches. The piers of the arches are ornamented with two carved, crossed leaves. A panel center of the chair back, flanked by rectangular cutouts, is recessed slightly with stepped molding around the edges and features a circular carving of horse chestnut blossoms and leaves surround by a ring of stylized flowers with half-circles. Beneath the panel is a narrow, carved, horizontal band of leaves and blossoms, flanked by matching square reliefs, over a row of turned ball-and-thimble-shaped spindles.

The arms appear to be continuous with the back legs and the arm rails. The arm rails are upholstered with leather on top and secured with copper upholstery tacks. The arm posts are carved columns with plumes where they meet the arm holds. Within the front arm posts and the rear rails are seven spindles matching those on the back of the chair. The square, solid wood seat is fitted with a removable, tufted leather cushion. The vertical planes of the seat rails are relief carved in Gothic-style type with a verse from Longfellow's poem, "The Village Blacksmith." Starting at the right side of the chair, the panel reads: [And Children coming Home from School / Look In at the open Door / and catch the burning Sparks that fly / Like Chaff from a threshing Floor]. Above this, on the sides and the back, is a band of small turned balls, spaced about one inch apart. Beneath the quote is a narrow band of stylized leaf carvings. Each side has two panels beneath the seat rails pierced with edge-molded trefoil arches, one per panel with panels separated by edge-molded vertical rails. Block-and-octagonal-turned front and rear leas are decorated with incised horizontal lines and stylized leaf and circle carvings. The legs terminate in small round glass ball feet with brass fittings. The chair has three stretchers, each with ring turnings and spiral-line incised lines, as well as a turned vertical support extending from the underside of the seat to the center of the medial stretcher. Flattened acorn drops are at the middle of each stretcher.

According the LNHS object record, the original upholstery was dark green leather and it was removed because of deterioration. The present upholstery was applied by Sal Kreed, about 1960 (information supplied by Frank Buda, LNHS, 4/1976). Scratches were blended in by Caristi & Sons, Roxbury, MA, 1/16/1975. As of 1976, the overall condition was good with general signs of normal wear. The medial stretcher was split on the right side, and a small section was missing from the drop on the ride side stretcher. The front spindle below the right arm has a nick. Two small ball turnings are missing from the right seat rail, and one from the rear.

Brass plaque screwed to the top side of wooden part of seat inscribed: [To / The / Author / of / The Village Blacksmith: / This chair, made from the wood / of the Spreading Chestnut Tree / is presented as / an expression of grateful regard / and veneration / by / The Children of Cambridge: / who with their friends join in / best wishes and congratulations / on / This Anniversary. / February 22. 1879.].

The chair was presented to Henry Wadsworth Longfellow by the "children of Cambridge" on Longfellow's 72nd birthday, February 27, 1879. (He even wrote about the occasion in his journal). According to legend, it was made from wood of the village blacksmith's "spreading chestnut tree" which once stood on Brattle Street by the home and shop of Dexter Pratt, a friend of Longfellow's and the subject of his well-known poem, "The Village Blacksmith." The tree was cut down when Brattle Street was widened in 1876. The children presented the poem to Longfellow along with a book containing the children's' autographs. In gratitude, Longfellow wrote a poem titled, "From My Armchair." According to the LNHS object record, The chair was placed in Henry's study next to the fireplace, and family lore stated that Henry welcomed in any child who wished to view it. See Andy Juell, "The Children's Gift To Longfellow," Anvil Magazine (September 2001), http://www.anvilmag.com/comment/109d2.htm (accessed May 25, 2018). See also https://artsandculture.google.com/asset/chair/hgFCAGZgAgvCpw (accessed May 30, 2018).

According to "Famous American Homes, News from Home 8 (January 1947): 11, the chair was designed by Longfellow's nephew, an architect, William Pitt Preble Longfellow, but no more conclusive evidence of the claim was found.

Metadata and images digitized from the Decorative Arts Photographic Collection of the Winterthur Library. For reproduction requests or more information, contact DAPC at reference@winterthur.org.

All materials are copyrighted by Winterthur Museum, Garden & Library or by participating institutions.